Plant a tree in memory of Jelte
An environmentally-friendly option 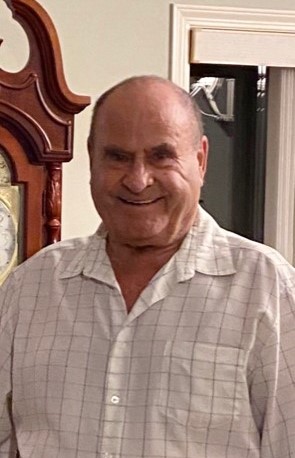 Jelte was born at the start of the Second World War and remembered the liberation of his town by the Canadian BC Royal Dragoons, a tank company based in Kelowna and Vernon quite well. His father and two brothers were hiding in a ditch across from the town shelter, the Germans were shelling four tanks nearby, and they could not get across the road. After many inquiries of veterans if they had served in Groningen, in 1983 he met a veteran from Kelowna at one of their car club camp outs who distinctly remembered his town, their tanks, and the German shelling.

In 1952 his family immigrated to Tabor, Alberta to work in the beet fields, and two years later moved to Abbottsford, BC. They travelled the Crow’s Nest Highway in a 1952 Pontiac with their parents and nine kids in the car. Highway 3 was a one lane gravel road at the time, with no room to pass an oncoming vehicle (one or the other would have to back up to find a place to pass). It was very steep and had lots of very sharp curves. He remembers his mom being so traumatized that she walked a lot as she was afraid to be in the car.

In 1958 he met the love of his life, Marie Leon in Mission City, BC, one week before her sixteenth birthday and fell in love at first sight. He even told his two brothers with him, “I just met the girl I am going to marry.” They wed on September 23, 1960 in Mission City and lived in North Vancouver for about ten years. Jelte worked in a sawmill there and later managed a local lumber yard. They were blessed by the birth of three children: Janice in 1961, Rick in 1962, and Carolyn in 1970. In 1971 they traveled throughout Europe for six weeks. Afterward, they joined his sister and brother-in-law Henry and Mina Kerkof and moved to the Okanagan Valley. He bought a dairy farm where he was called the singing farmer of Grindrod, singing Elvis’ “How Great Thou Art” at the top of his voice late at night as he worked the fields. Four years later he bought another farm six miles down the road to use as a crop farm.

In the winters he restored antique carriages, sleighs, and anything horse drawn until he had sixteen of them sitting in his barns. Marie suggested he try something more challenging as she and Jan had run across a dilapidated 1926 Model T Touring on one of their garage sale hunts. He stripped it down to the frame and put it all shiny and new. His second one was a 1929 Model A Roadster he found in a barn in Mission City. The bottom eight inches were completely rusted out, but he took it home and changed it as if it had just come out of the showroom. His next was a 1941 Chrysler Royal two door coupe he traded from his brother Herman for his 1974 Lincoln Continental. Jelte was a founding member of the Shuswap Vintage Car Club. He served as president and sat for many years as an executive.

In 1995 he was stricken with a serious lung disease and was not expected to survive but after 27 days in intensive care, he began to improve. Jelte was never able to do the hard work he used to do and was troubled with the ailment for the rest of his life.

He loved snowmobiling and you could often find him with his brothers, nephews, and friends in the mountains. Their snowmobile parties at the farm are still talked about today.

In 1989 they sold their farm, and he built their home in Armstrong. Jelte did all the work except for the framing. He built two more homes in Vernon and one more in Armstrong. In 1992 they moved bought a house in West Kelowna that needed restoration.

Jelte and Marie travelled extensively throughout the United States, Europe, Barbados, Indonesia, and Hong Kong, just to name a few. They were snowbirds for 35 years, spending winters in either Arizona or Mexico, until their health deteriorated in 2013.

Plant a tree in memory of Jelte by clicking here.
To send flowers to Jelte's family, please visit our floral store.

Plant a tree in memory of Jelte
An environmentally-friendly option

Plant a tree in memory of Jelte

6 trees planted in memory of Jelte

Our family would like to thank everyone for all the heartfelt condolences, flowers, cards and food. Your love and support is so greatly appreciated. We are so saddened by our sudden loss and he will be missed so much, Love Marie, Janice & Tim, Carolyn & Tony ❤️❤️❤️❤️❤️

I am so sorry to hear of Uncle Jelte's passing. I have so many fond memories of when our families would visit together. May the laughter and love of the past bring you peace.
God Bless you.
Wendy Ann Bronk Cuddeback

A Memorial Tree was ordered in memory of Jelte Ganzeveld by Wendy Ann Bronk Cuddeback.  Plant a Tree

My 1st memories of Uncle Jelte were in North Vancouver...he had the coolest car ...the windows were trimmed with white pom poms, he had the radio blasting with Buddy Holly singing his heart out to "Rave On" & driving fast.  Uncle Jelte had vibrant personality ...he was a big kid at heart always ready to have fun.  Auntie Marie & Uncle Jelte had the best parties & he'd have dad drumming & he would be singing & dancing like Elvis Presley, while mom & Auntie Dancing like they were fans lol.. Auntie Marie, Uncle Jelte & my parents (Lyle & Grace Bobb) had children very close in age & so young themselves....making growing up with them so active & fun...thank you Uncle Jelte for all the special memories I was lucky enough to be a part of...
Love your niece Elain & Denis

I love you so much my brother. I can’t stop the tears from flowing. May rest and be happy where you are you are no longer in pain. Love you jelte

A Memorial Tree was ordered in memory of Jelte Ganzeveld.  Plant a Tree

Plant a tree in memory of Jelte